Swiss gallerists Iwan and Manuela Wirth have built a career on rethinking the model of the commercial art gallery, so it is unsurprising that their “happy place” in the Scottish Highlands, as they call it, redefines what a hotel can be today. They acquired The Fife Arms, a 19th-century coaching inn in the village of Braemar in the Cairngorms, in late 2014. They have since transformed it into a unique and award-winning combination of Scottish culture and craftsmanship, international contemporary art, and exceptional hospitality.

Iwan, Manuela, and Manuela’s mother Ursula Hauser founded Hauser & Wirth in Zu?rich in 1992. Iwan was just 22, but it was not his first foray as an art dealer. When he was seven, he had held an exhibition of his own small copies of Giacometti and Henry Moore sculptures in the basement of his grandfather’s office. “I made 70 francs in one week,” he told me, “so I thought that’s an easy way to make a living.” Nine years later, he opened a gallery in his home town St Gallen, at the foot of the Swiss Alps. It was open only on Wednesday and Saturday afternoons and Sundays to avoid clashing with school. Three years later, aged just 19, he set himself up as a private dealer in Zu?rich. That was where he met Ursula, a retail magnate and art collector. Iwan asked her to help fund the purchase of works by Chagall and Picasso. She accepted, and they agreed to go into business together. They celebrated the venture with a bottle of cognac, which was so potent that it rendered Iwan inarticulate when Ursula introduced him to her daughter. Manuela, a teacher, was unsure of this “confident young man” at first, but was also fascinated by him. “I thought, if my mother is so enthusiastic about him, there must be some substance there,” she says.

When they launched the gallery three years later, Manuela worked part-time as Iwan’s secretary while continuing to teach, just in case the business didn’t work out. Soon after, they became a couple, and they have shared their professional and private lives ever since. They married in 1996 and now have four children.

From its original space in a first-floor Zu?rich apartment, this family firm with a global outlook has expanded over nearly three decades to become one of the world’s most powerful commercial galleries, with an empire extending to outposts in New York, Los Angeles, London, Somerset, Gstaad, Menorca, St Moritz, and Hong Kong. Not only does the business represent almost 90 artists and estates, it also counts a publishing arm and a not-for-profit research institute as part of its diverse range of activities, which also encompass education, conservation, and sustainability projects. From the beginning, Hauser & Wirth has mounted historically significant exhibitions, while building a reputation for its dedicated support of artists, curators, and scholars to realise visionary projects worldwide. Iwan and Manuela are also admired for their record of restoring old buildings and giving them a new lease of life as spaces that
invigorate local communities while respecting their original character.

Having renovated a former brewery into a space that became Hauser & Wirth Zu?rich in 1996, they went on to develop an Edward Lutyens-designed former bank as their first London gallery and the legendary Roxy discotheque and skating rink in New York. More recently, the pair converted Durslade Farm, a complex of dilapidated farm buildings in rural Somerset, into a world-class art centre, as well as redeveloping a vast former flourmill in downtown Los Angeles as their gallery in the city. The latest project is the creation of an arts centre on the Isla del Rey, an island located in the port of Mahon in Menorca, that is home to a decommissioned naval hospital and a group of disused 18th-century outbuildings.

The renovation of The Fife Arms is part of this longstanding commitment to conservation and sustainability. The hotel had been a local landmark since Queen Victoria acquired nearby Balmoral Castle in 1852, but in recent years it had lost much of its grandeur. “It was owned by a bus company and was hosting coach parties,” recalls Iwan. “Bus tourism is to Braemar what cruise ships are to Venice or Monaco. It was an abused building, but one of extraordinary poetry and power.” The couple fell in love with it immediately, having already bought a house in the area. “We said to each other, wouldn’t it be amazing if we were able to bring it back to life?” They began an extensive three-year restoration of the property in 2015. Like their earlier ventures, the project was embedded in the heritage and traditions of the local culture. Nothing was undertaken without the support of the community.

“It’s a very Swiss way,” explains Iwan, who comes from a place where political decisions are still made by a show of hands at the cantonal assembly. “Sharing dreams, creating utopian ideas together.” They spent time getting to know the locals and building consensus before starting the work. “We don’t want to drop into places with a grand gesture and tell people how it’s done. That’s not us. We want to grow things.” Manuela continues: “Just as we did in Somerset, we asked them what they wanted and what it should involve.” Although catering is an integral element of other Hauser & Wirth locations – notably Somerset, where Durslade Farm includes a guesthouse and the Roth Bar & Grill, and Los Angeles, which boasts the Manuela restaurant – Iwan admits that they are not hospitality experts. “We did not know how to make hotels or how to run them, but we do know talent and how to find it.”

They worked with craftsmen from the surrounding area to employ traditional methods and source local materials and furnishings to give the restored building an authenticity, but also as a way of re-energising declining local trades. At the same time, they invited some of Hauser & Wirth’s artists to create special commissions throughout the hotel in a provocative dialogue with the place’s history and landscape. These include two chandeliers, one by Richard Jackson and one by Subodh Gupta, a large mural by Guillermo Kuitca, a ceiling by Zhang Enli, and a series of installations utilising bindis by Bharti Kher. Each of the 46 sumptuous bedrooms was individually designed with its own identity as “a piece of the Braemar puzzle and to tell a story.” Finally, they installed a vast collection of 16,000 antiques and works of art throughout the hotel, all set against colourful William Morris patterned wallpaper and rich bespoke tartan and tweed. As with Somerset and Los Angeles, The Fife Arms has provided a welcome boost to the area’s economy and an important social gathering space for the community, with the hotel pub, The Flying Stag, doing a roaring trade serving locals. The venture has been so well received that Iwan and Manuela were encouraged to acquire Braemar’s other large hotel, The Invercauld Arms, which they are currently restoring and will open with a distinct offering.

Just how do they manage so many projects, as well as a young family? “You have to be very organised and disciplined,” Manuela tells me, “and we have wonderful people working with us. It wouldn’t be possible without them.” Is there no end to their ambition? “We do way too many things,” Iwan concludes. “In many ways, I wish we were normal, because it causes all kinds of trouble. We’re always on the move. But it’s a primal instinct that we share. For us, there’s no separation between life and art. It’s a 20-hour-a-day business, and we never do holidays the way that other people do. It’s simply an approach to life and a curiosity about the world. I hate being a tourist anyway.”

“We wanted to create a home for people, because a home is personal, meaningful, and authentic. Everything, down to the books, has been chosen as if it were our own place. So it has our personality, but we hope that it feels like yours too.”

From: For Art’s Sake, Inside the Homes of Art Dealers, by Tiqui Atencio Demirdjian, £65, Rizzoli.
Photographed by JEAN-FRANÇOIS JAUSSAUD
Text by TIQUI ATENCIO DEMIRDJIAN

Storage Wars: It’s Time to Organise Those Junk Drawers 2 hours ago 5 MIN READ
See Inside Designer Amanda Pratt’s Victorian Home 8 hours ago 8 MIN READ
Do You Have A Growth Mindset Or A Fixed Mindset? 9 hours ago 4 MIN READ All of the hotel’s rooms are furnished in an individual period style. There are 70 varieties of wallpaper in the building, several of which are revived Liberty or William Morris designs produced in their original colourways. Iwan and Manuela Wirth in the courtyard of The Fife Arms, created using locally sourced timber, with Louise Bourgeois’s bronze Spider from 1994. Gerhard Richter’s Adler (Eagle) from 1972 hangs on the wall of the Clunie dining room, which is covered entirely by Guillermo Kuitca’s hand-painted mural that takes its inspiration from the forms and colors of the Clunie River that flows directly outside the room. 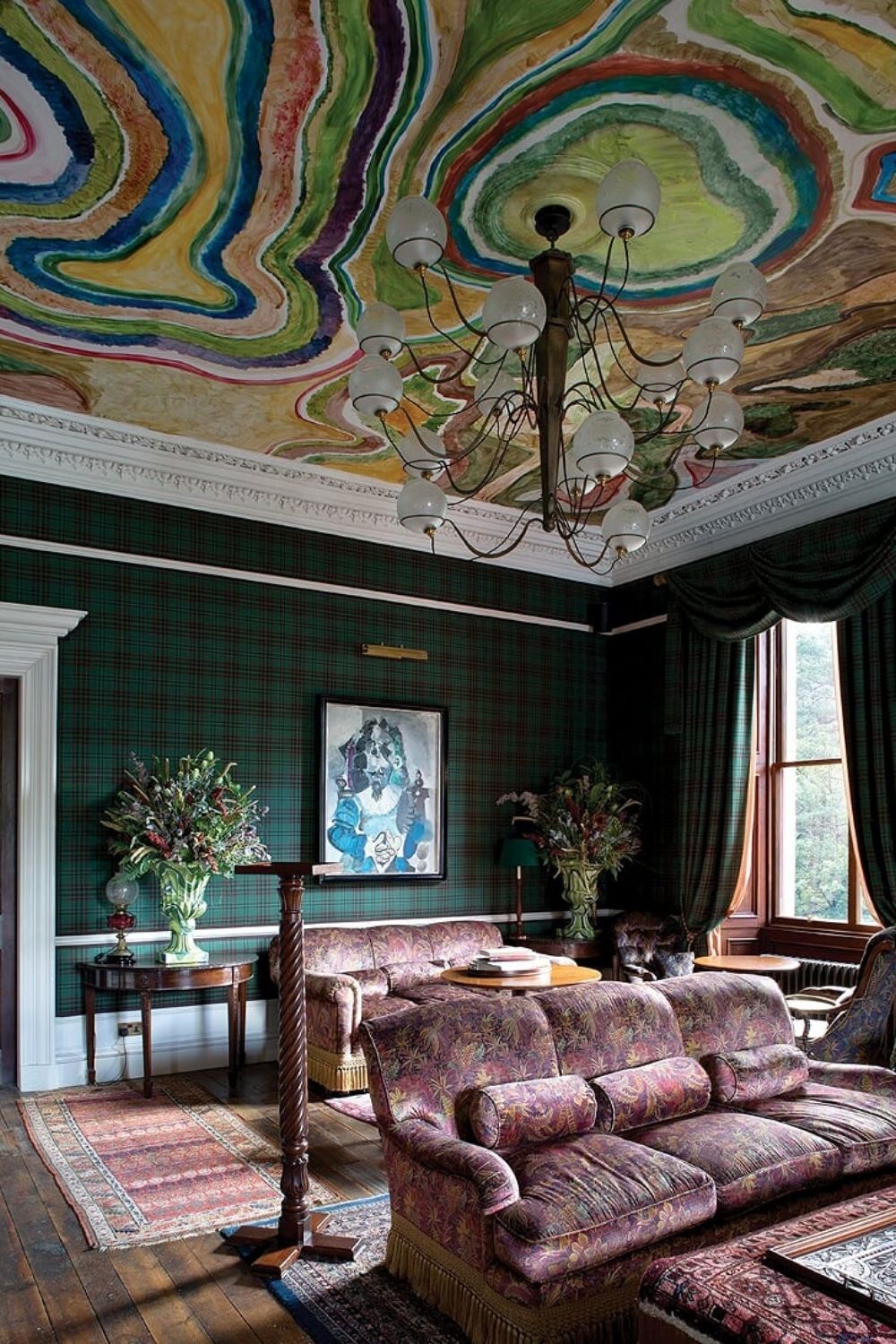 The hotel is also home to an outstanding collection of Scottish art. Zhang Enli’s Ancient Quartz on the ceiling dominates the drawing room, which also displays Pablo Picasso’s Mousquetaire assis from 1967. The walls are covered in the bespoke Fife Arms tartan made by the Edinburgh-based designer Araminta Campbell. From: For Art’s Sake, Inside the Homes of Art Dealers, by Tiqui Atencio Demirdjian, £65,
Rizzoli. Photographed by JEAN-FRANÇOIS JAUSSAUD Text by TIQUI ATENCIO DEMIRDJIAN

All of the hotel’s rooms are furnished in an individual period style. There are 70 varieties of wallpaper in the building, several of which are revived Liberty or William Morris designs produced in their original colourways.

Iwan and Manuela Wirth in the courtyard of The Fife Arms, created using locally sourced timber, with Louise Bourgeois’s bronze Spider from 1994.

Gerhard Richter’s Adler (Eagle) from 1972 hangs on the wall of the Clunie dining room, which is covered entirely by Guillermo Kuitca’s hand-painted mural that takes its inspiration from the forms and colors of the Clunie River that flows directly outside the room.

The hotel is also home to an outstanding collection of Scottish art. Zhang Enli’s Ancient Quartz on the ceiling dominates the drawing room, which also displays Pablo Picasso’s Mousquetaire assis from 1967. The walls are covered in the bespoke Fife Arms tartan made by the Edinburgh-based designer Araminta Campbell.

From: For Art’s Sake, Inside the Homes of Art Dealers, by Tiqui Atencio Demirdjian, £65,
Rizzoli. Photographed by JEAN-FRANÇOIS JAUSSAUD Text by TIQUI ATENCIO DEMIRDJIAN